Ticket To My Heart – Admit One

With Valentine’s Day approaching I thought I would share this design for a custom gift which I made. It’s a Printed Circuit Board (PCB) in the guise of a cinema ticket inscribed with the words Ticket to my heart, admit one. 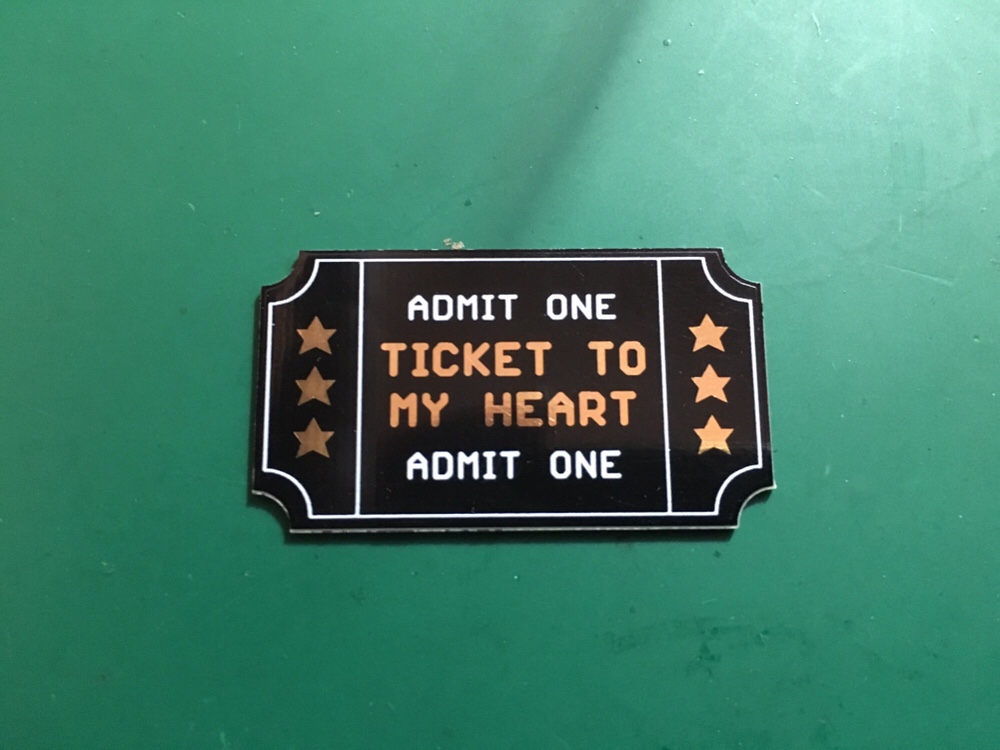 I had versions produced at elecrow and at PCBs.io, both of whom produced fine PCBs though elecrow was more than £20 compared to the £6 for PCBs.io. The big cost at elecrow was the ENIG (gold). Whereas PCBs.io boards are always ENIG. Standard PCBs are 1.6 mm thick. I had the elecrow one made 1.0 mm thick which allows it to be carried on the person more easily.

The elecrow quality was slightly better, though I think if you hadn’t seen the elecrow version the PCBs.io version would be acceptable albeit with a few characterful little blemishes here and there. The above image shows the elecrow version on the right hand side with 3 versions from PCBs.io on the left. Elecrow nicely routes the edges all the way around which is useful on this project.

I removed the website address from the later versions sent to PCBs.io and replaced it with the words Golden Ticket. In a homage to Mr Wonkas golden ticket in Charlie and the chocolate factory. The text is just standard eagle CAD text and could do with a better style image importing from Inkscape or another package.

Other than requiring a bit more rounding for the corners which I had to rub down with emery paper on all versions and trimming the break offs on the PCBs.io version it all went very well. I also need to correct the white outline around the edges but that’s barely noticeable.

By the way PCBs.io has a very nice PCB visualiser which made this project much easier.

It’s been a fun little project, I’m pleased with how it went. I have in mind some other projects. One is a badge for the local Hackspace and another a badge for the U.K. National Health Service (NHS) as a thank you to them for everything they do.

Files are available on my github account under username mvw123.