Is the TV broken, has the TV software stopped responding or is it just that the remote controls batteries have gone flat again?

This little paper circuit will test if your remote control signal is being sent and therefore whether the batteries are still working. You can easily fit this one inside your logbook for safe keeping because, whilst it’s useful it’s not something you’d use very often! 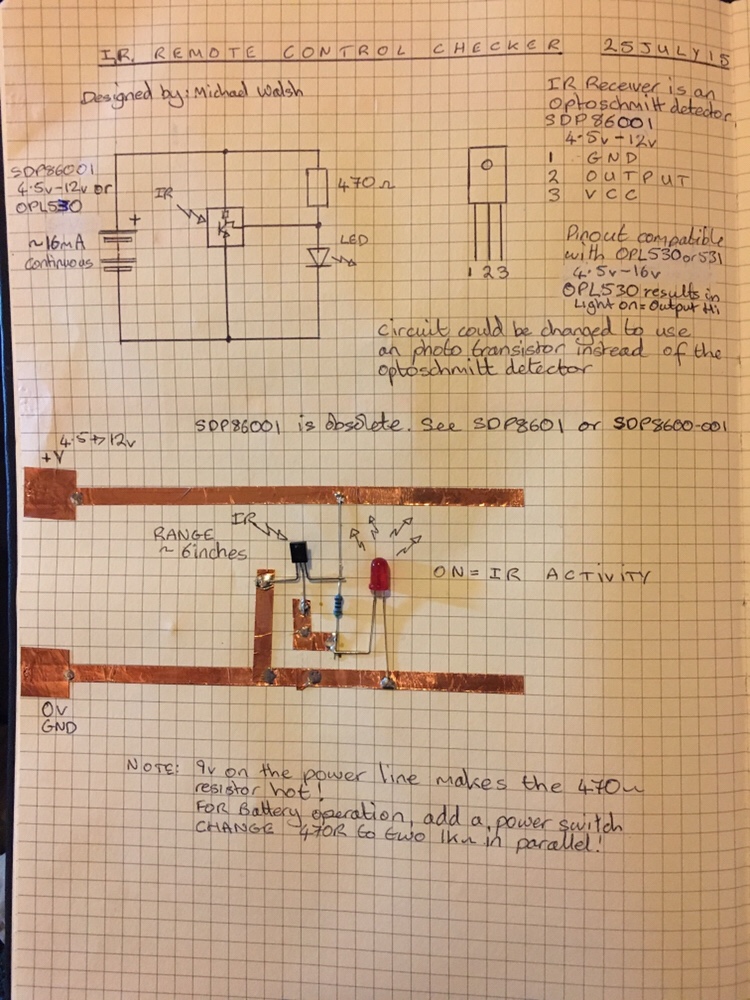 The circuit consists of an Infra-red opto-schmitt detector SDP86001 with a resistor and LED on its output. That’s it. The receiver has a short reception range of about 20cm which is useful for testing IR remote controls up close.

The seemingly odd LED output drive circuit allows the LED to come on when the IR remote controller button is pressed which is the way I wanted it to work instead of flashing off when IR was detected.

Inside the SDP86001 is an open collector transistor with a 10k pull-up resistor. We parallel the internal 10k ohm resistor with a 470 ohm external resistor. Which should really be a higher resistance to reduce the heat generated. When you press the remote control button, the transistor goes open collector and the power is applied to the LED via the 470 ohm resistor. When there is no IR the internal transistor is turned on and the output line is pulled low. This unfortunately draws a lot of power through the 470 ohm resistor so it’s not a low power solution.

To test the remote, you power the circuit from a 9 Volt battery. Then point the remote control unit at the opto-schmitt detector and press any button. If working the circuit LED should illuminate. Compare its operation against a good remote if your not sure. Note that decoding of the IR signal is not carried out. This is a light the blinky LED type test!

Alternatively you could buy yourself an IR detector card which is completely passive, based on some very snazzy technology.